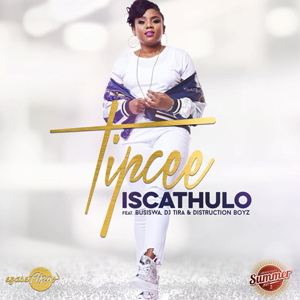 Growing up in the groovy, talent filled, iconic township of UMLAZI influenced Tipcee’s love for music and eventually her career path as every second house in her neighborhood played music LOUD, simultaneously and religiously each and every Friday; marking the beginning of the weekend and an end to a gruesome week for the working class.  Not only that; but growing up, she believed that music was almost the only thing that could bring joy to most people, it was it’s effectiveness in provoking happy feelings that she found fascinating.  Tipcee’s teenage years were filled with music in a very unbelievable way, so much that even the taxi’s she commuted in would blast music on her way to school and back. This she believed were some of the joys of being born and raised in the rhythmic land of Kwazulu-Natal.  A life of the party amongst her friends, Tipcee has always been known for her
gimmicks and wordplay when presented with an instrumental. Her free styling made her popular amongst dancers and propelled her into a popular figure in her community.

In 2009 Tipcee marked her spot in the music industry and begin her journey in pursuit of a professional music career. She was lucky enough to meet UMLAZI born hit maker, (DJ Gukwa) a seasonal hit maker who has produced numerous hit songs under DJ TIra’s Afrotainment. After recognizing her potential, DJ Gukwa would later introduce the young Kwaito artist to DJ Tira who didn’t waste time getting her into a recording session at his famous Afrotainment studio where the 2017 “Amadada” smash hit was recorded.

Tipcee has since been featured on songs with South African prominent artists such as DISTRUCTION BOYZ on “Madness”, a song that cemented her brand amongst music lovers and proved that she was not a “fly by night” as her voice ruled the December festivities of 2017. The best newcomer of the year in her own standards, her fire could not be extinguished as she dished more hits alongside her label boss on “Iscathulo”- where she featured Distructionboyz, Busiswa & Dj Tira.